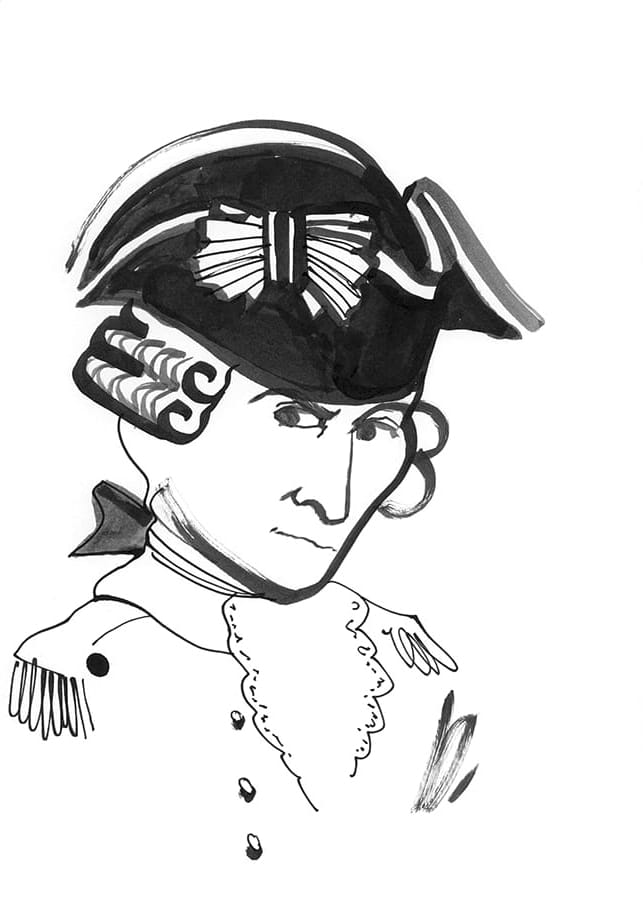 Leyba was the commanding officer during the successful defense of Spanish St. Louis against British attacks in 1780. He collaborated with Colonel Rogers Clark and his men, thus keeping the upper Mississippi free from enemy hands during the American Revolution.

Fernando de Leyba y Córdova was born on July 24, 1734, in the Spanish city of Ceuta on Africa’s northern coast, one of the most emblematic strongholds of the Spanish military. Despite the long military tradition of his father’s family line, whose earliest known ancestors took part in the 15th-century reconquest of Granada, it seems that originally Fernando had no intention of pursuing a military career. It was, instead, the untimely death of his father that obliged him, as well as his siblings, to join the Royal Service. He was not quite seventeen when he joined the army of Carlos III as a cadet. Fernando served with the España Regiment for three and a half years before being promoted to company sub-lieutenant in the Aragón Regiment on March 25, 1756. He held this rank for almost seven years, taking part in the defense of Havana during the British Siege of 1762, and then in the battle of Castillo del Morro under Captain Fernando de Párraga. Leyba was taken prisoner when the fortress fell to the British. Soon after his return to the Peninsula, he was promoted to flag sub-lieutenant on May 22, 1763, and to lieutenant with the Soria Regiment in just four and a half months, on October 11, 1763. In 1764, he requested a transfer to the Corps of Engineers, but while his captain underscored Leyba’s proficiency in mathematics in his report, it seems Leyba returned to the Aragón Regiment instead. This outfit, garrisoned in Orán, would supply part of the troops selected for a battalion to be permanently stationed in New Orleans in the Province of Louisiana, and Leyba was promoted to company captain on June 4,1768.

On learning of his transfer to Louisiana, even before his patent for the new rank had been issued, Fernando de Leyba married Maria de la Concepción de César y Martínez-Fortún, in July, 1767.

A year later, in October, 1768, the troops destined for America sailed from Cádiz. On their arrival in Havana, they were met with news of the expulsion of Louisiana’s first governor, Antonio de Ulloa, from New Orleans. Leyba would spend the following year in the Cuban capital while preparations were being made for an expedition to retake the colony. In the meantime, the Leybas were also awaiting the arrival of their first child, who was born the day before the expedition sailed. Josefa María de los Dolores, whom the family would endearingly call Pepita, was born on July 5, 1769.

A fourteen-day crossing of the Gulf of México landed the 24-ship expedition at the Head of Passes, and another 28 days of warping and towing brought them to the wharf in New Orleans. Lieutenant General Alejandro O’Reilly took formal possession of the colony on August 18, and a new provincial government was organized and the battalion formed. Fernando de Leyba was placed in command of the Third Company of Fusiliers, which was to remain and serve in the capital. Over the next decade, Leyba would also command two frontier posts: Arkansas Post (1771-1774) and St. Louis in the Illinois Territory (1778-1780).

Leyba’s Arkansas Post command, which he held by order of Governor Luis de Unzaga, provided him with valuable learning experience. The post was situated on the Mississippi River, 550 km (800 km by river) north of New Orleans. It consisted of a small wooden fort that garrisoned 14 soldiers and a village of 78 mostly French-speaking merchants and hunters. This first contact with the Louisiana wilderness was overwhelming, as Leyba was met with serious problems upon his arrival: a ruinous fort with useless armaments, unpaid troops on the verge of rebellion, and a dangerous lack of provisions. Once these initial problems were resolved, his governance focused on ensuring the general well-being of the inhabitants, controlling commerce and the sale of alcohol, and maintaining good diplomacy with the local Quapaw Indian tribe. Adding to these challenges were the constant danger of attack by the warring Osage Indians and severe and repeated bouts of personal illness. Still, Leyba persevered in his command and gained the upper hand on the many difficult situations he encountered. What was supposed to be a five-year term was cut short, however, due to his continual bad health. After just three years in Arkansas, he returned to his command in the capital.

Again in New Orleans and with an additional family member—their second daughter, Rita Gertrudis Buenaventura, had been born on July 4, 1771, shortly after their arrival at the Arkansas Post—the Leybas made their home at the corner of Ursuline Avenue and Royal Street, on a property that overlooked the back gardens of the convent.

Leyba’s Illinois command was granted to him four years later by Governor Bernardo de Gálvez. His new title, Commander-in-Chief and Lieutenant Governor of the Western Part of the Illinois Territory, gave him jurisdiction from the mouth of the Ohio River to the frontier with Canada and covered the towns of St. Louis (pop. 689) and Ste. Genevieve (pop. 698), two small forts on the Missouri River, and some lead mines, as well as the Missouri River and Illinois River districts, where hunters and traders earned their living. In the two years of his command at St. Louis, Leyba’s efforts centered on keeping the peace with his British neighbors to the north and east and with the indigenous tribes of the region, protecting the waterways from trespassers and smugglers, promoting immigration, and increasing agricultural production. He is credited with two important accomplishments: the building of a road between the towns of St. Louis and Ste. Genevieve and the creation of a militia cavalry company.

The special political climate of the times made for a unique governorship in Illinois. In keeping with his country’s policy of providing covert aid to the American rebels in their fight for independence from Great Britain, Leyba collaborated closely with Colonel George Rogers Clark, whose Illinois Regiment occupied the eastern part of Illinois in July of 1778. They moved supplies, military stores, correspondence, and information via the Mississippi and Ohio rivers. When war broke out between Spain and Great Britain in June, 1779, the British rallied Canadian fur traders and Native American allies to attack Leyba and Clark in Illinois and take the entire Mississippi River valley. Leyba is best known for his successful defense of St. Louis, for which he built a stone tower and 2,000 meters of entrenchments.

In February, 1781, news of the battle was published in the Gaceta de Madrid, together with news of Leyba’s promotion to lieutenant colonel in reward for his vigorous defense of St. Louis. The reward was given posthumously, however, for Leyba had succumbed to an illness, at the age of 45, in the early morning hours of June 28, 1780. He was laid to rest in his parish church alongside his wife, who had passed away the previous September. They left two young daughters, then 11 and 9 years of age, who, at the end of hostilities in North America, journeyed with family and friends to Spain, where they eventually married and had families of their own.