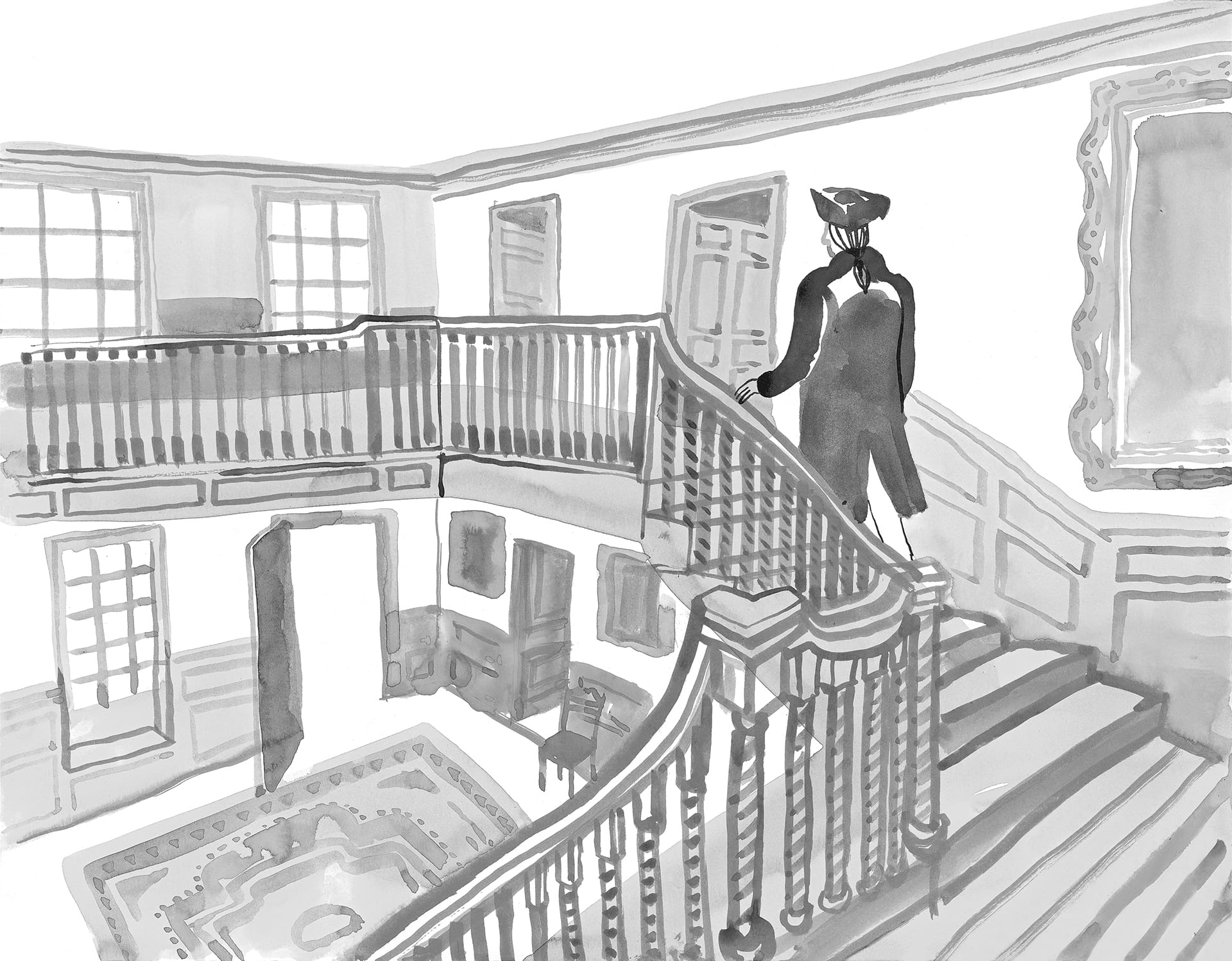 On the table of a grand regional hotel in a southern Spanish city laced by heat and the river sits the calling card of the current Count de Gálvez: a noble lineage circumscribed within a small white rectangle for a 21st century already consuming its first decades, the last one hundred years now hardly visible to a falcon’s eyes. The distance between us and those hardy men of the past grows by the day, as does a nostalgia for those eras we never experienced. The titles of the nobility still lend us a mental picture of those times (uniforms, stripes, modes of speech, norms, solemnities), yet it is quickly eclipsed by the functional aesthetics of this modern count: coat and tie, technological accessories for daily use, the latest smart phone, and such.

Thus we meet the congenial and somewhat cautious Pedro Alarcón de la Lastra y Romero, the current holder of the title which Carlos III granted Bernardo de Gálvez after his courageous, strategic, and definitive involvement in the U.S. War of Independence. Some years earlier, the Thirteen Colonies had taken up the fight for freedom against Great Britain, officially declaring their independence in the summer of 1776. It is a title that signifies heroism as a way of life, each heroic act an engagement entered in a weekly calendar.

Bernardo de Gálvez, the 18th century government agent and soldier, governor of New Orleans, viceroy of New Spain, was molded by military discipline, even as a young child. He was a subject to the Crown; he was also a subject to his innate boldness. “I know not how long, whether days or months, it will take us to defeat the enemy. But to return to Chihuahua shamefaced, having wasted time and money for no gain, is the fate of men without honor; such ignominy has no place in my mind. I shall go alone, if there is no one to go with me. I shall take a scalp back to Chihuahua or repay with my life the bread I have received from the King.” Such were his words to his soldiers during a dramatic mission in Texas territory, when, as a young commander of the forces of New Vizcaya, he was defending the remote Spanish outposts.

Fearless, romantic, audacious, accurate when facing impossible decisions, he represents, as only a select few do, the intensity of life described
by Becquer in his lines,

We are born with a bolt of lightning
and its fire yet glows at our dying,
so fleeting is our life.

Between the historic Gálvez and his present heir—a businessman of polished manners and a loyal admirer of his ancestor—the earldom embraces the profundity of two long centuries of Spanish history. It takes us from this moment, where parsimony and a desire for comfort reign, and lives must be shielded from any upheaval, to the remotest limits of the Spanish empire in North America, when Bernardo was feeding those erstwhile Spanish provinces with waves of peninsular and island settlers year after year. From west of the Mississippi to the Pacific Ocean, he would forge a path for myriad travelers leaving the ports of Andalusia, their eyes fixed on America—the Mexican port of Veracruz, finally visible after nearly three months of a hazardous crossing.

In 2018, Pedro Alarcón de la Lastra y Romero was named Honorary Mayor of Baton Rouge, capital of the state of Louisiana and the setting of the major strategic campaigns commanded by the soldier from Málaga. The young count was eager to retrace his ancestor’s legendary march up the Mississippi, the defensive and offensive campaigns that led to his control of the river. And so he spent several days driving the route Gálvez and his men had taken, including strategic points along the Gulf of Mexico. The successive victories of Natchez, Manchac, Mobile, Pensacola… all placed the great North American river at the service of the revolutionaries. Today, the original landscape and the scars of wounds inflicted on Gálvez’s motley army are hidden under miles and miles of highway connecting states of the Union that were not yet states then—Alabama, Mississippi, Texas, Louisiana—all of them territories of undeniable Hispanic heritage.

The new Count de Gálvez takes a final sip from a cup served by one of the hotel waiters before assessing the distance between centuries and Bernardo’s historical significance. “What he achieved, no one else can achieve,” he says, with poise. His words alluding to a soldier recall the Napoleonic maxim, “My son cannot replace me. Not even I can replace myself. I am the son of circumstances.”

Today, the Earldom of Gálvez is a symbol of unwavering distinction, a coveted social title which, nonetheless, had been left unfilled for years, until the late 1960s. Luis Alarcón de la Lastra, grandfather of the current count, renewed the title in 1968, along with the Marquisate of Rende, another noble but forgotten distinction. He hoped that this effort would ensure a more equitable distribution of his legacy to future generations.

At the time it seemed that the Marquisate of Rende would be the more illustrious of the two. But over the last decade, we have witnessed a growing validation of the Spanish officer, at first discreetly, and then with increasing openness in forums and among the media, thanks to the quiet yet indefatigable efforts of citizens on both sides of the Atlantic. Displaying a granite will and a romantic passion in equal measure, Spaniards in Spain and North Americans in North America, or North Americans in this country and Spaniards across the Atlantic have persuaded relevant public institutions and private companies to see in Gálvez a renowned and significant historical figure around which to promote a strong relationship between Spain and the United States. Iberdrola’s endeavors, between 2016 and 2019, to develop a series of exhibits and publications devoted to Spain’s contribution to the North American Revolution are of particular importance in understanding and appreciating the scale and impact of that contribution. The exhibit Recovered Memories/Memorias Recobradas, shown in New Orleans and in Washington, D.C., and its exquisite catalogue are notable fruits of a nationwide effort.

According to Carmen de Reparaz, a research pioneer in this field, whose work was collected in her essential book Yo solo: Bernardo de Gálvez y la toma de Panzacola en 1781: una contribución española a la independencia de los Estados Unidos. (I Alone: Bernardo de Gálvez and the Taking of Pensacola in 1781: a Spanish Contribution to the U.S. War of Independence), [Gálvez], like any other man who is greater than his time, cannot be likened to an umbrella we leave behind in a park, expecting to find it as we left it, when we return after some time. Heroes, as Emerson explained in Representative Men, are those who expand human potential, enrich and intensify life’s experience, and broaden the intensity of our existence. It is up to the living to ensure, for our own benefit, that such heroes endure.

We should also note an event from the last decade. In 2010, Manuel Olmedo Checa, a scholar from Málaga, published the results of his extensive research in the Archivo Nacional de Indias in Seville and the National Archives and Records Administration (NARA): records from 1783 show that the Continental Congress of the newly formed United States had resolved to honor Gálvez for his indispensable assistance to the Revolution by hanging his portrait “where Congress meets”. Two centuries later, the promise was yet to be fulfilled and did not seem to be any closer to fulfillment upon the publication of these results. However, in March, 2013, a news item published in the Málaga daily Sur reminding its readers of this pending debt caught the attention of Teresa Valcarce, a native of El Ferrol (Galicia) and resident of Washington, D.C., who holds dual citizenship. Valcarce set out on a tireless personal mission which would ultimately involve the House of Representatives, the Senate, and the presidents of Spain and the United States. Her unparalleled selfless efforts made Bernardo de Gálvez’s legacy the focus of such media giants as the Los Angeles Times, Washington Post, and major television networks, all of whom began to refer to her as “The Lady of the Portrait”—a lively lady who, armed only with a briefcase full of documents and papers, would walk through the halls of the Capitol and visit senatorial chambers in Washington, as well as the Spanish embassy, determined to talk to anyone who would listen and could help heal this wound of neglect.

Goodness may not be fashionable these days, but Teresa Valcarce is an essentially good woman of remarkable generosity and enthusiasm. These two qualities became the basis of her endeavor to dust off a historical and administrative pledge, ultimately winning diplomats, senators, and representatives to her cause.

The portrait of Bernardo de Gálvez, a fruit of the nocturnal Mediterranean efforts of Málaga painter Carlos Monserrate, now hangs on one of the walls of the U.S. Senate’s Foreign Relations Committee Room in the Capitol. On December 9, 2014, in her words of acknowledgment, Valcarce explained why she, a common citizen with no influence in a city whose main industry is power, had worked so strenuously in favor of such a singular cause. “I would like to thank my mother for all her support throughout this adventure. And my three precious children, Pablo, Lucas, and Lucía. I did this for them. Because they represent the future, and Gálvez’s roots are also their roots. I will continue to see to it that Bernardo de Gálvez remains an inspiration to them, helping them to make their dreams come true and to strive for what they believe to be just and good. God bless Spain, and God bless the United States of America.”

Valcarce’s tour de force helped revive another dormant cause: the proclamation of Bernardo de Gálvez as Honorary Citizen of the United States. The practice of granting honorary U.S. citizenship dates back to President John F. Kennedy. In 1963, an aging Winston Churchill would be the first dignitary to receive this honor. Since then, both houses of the U.S. Congress, with the requisite approval of the Executive Branch, have granted eight honorary citizenships. Early in 2014, Florida congressman Jeff Miller initiated the nomination process for Bernardo de Gálvez, gathering support from Republicans and Democrats alike, although not without some difficulties and delays. After a long legislative process, which involved the valuable assistance of several U.S. citizens, including Molly Long de Fernandez de Mesa and Nancy A. Fetterman, and seven days after Gálvez’s portrait had been hung in the Capitol, President Barack Obama signed the proclamation of the Spanish officer as Honorary United States Citizen. The daily paper, Roll Call, featured the following headline: “2014 has been a good year for Bernardo de Gálvez, undoubtedly better than the past two centuries.”

This true hero represents a link between our human limitations and our highest ideals. Today’s crafters of fiction create videogame heroics; but no blood runs through the veins of their characters, nor do they embody the complexities of a particular epoch. Gálvez was a soldier with an exquisite sense of honor and duty, in the service of a Crown that was both absolutist and enlightened. Today, his name is being attached to projects that will expand his reputation. In Houston, for example, the Order of Granaderos y Damas de Gálvez is working on the production of an opera, Gálvez of Galveztown: The Unsung Hero Sings, and in schools, as a result of various ventures led by the Spanish journalist Guillermo Fesser, many Hispanic children stand proud when they learn that men of their own heritage lived and died to build this nation: rich, diverse, and deeply multifaceted.